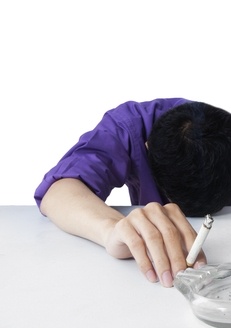 The association between smoking and obstructive sleep apnea (OSA) has been clearly demonstrated in many research studies. Smokers have a three times more increased risk of developing OSA than non-smokers.

There are several common risk factors and consequences of OSA and smoking:  stroke, heart disease, cancer, metabolic syndrome, decreased cognitive functioning, oxidative stress, activation of the inflammatory system, just to name some of them. Smoking itself is a risk factor for OSA.

WHAT HAPPENS DURING SLEEP 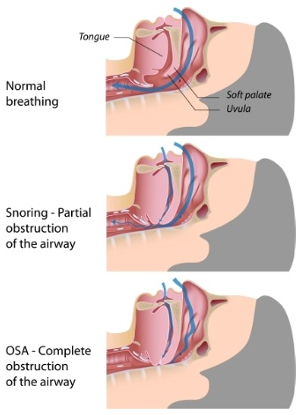 This stop-start-stop-start breathing and resultant lack of oxygen causes a disruption in sleep called sleep fragmentation.

Consolidated sleep, which is like a continuous stream of peaceful sleep, produces the finest rejuvenating, restorative sleep.  Sleep fragmentation breaks up sleep, sometimes as much as every 15 seconds.

As a result of this fragmented sleep, the person’s mind and body is not restored during the night and the person suffers from tiredness, sleepiness during the day, and many devastating medical conditions that result from a lack of sleep and a lack of oxygen in the body.

HOW SMOKING AND NICOTINE AFFECT OSA

The association between smoking and sleep apnea include smoking-induced upper airway inflammation, the effects of nicotine on upper airway muscles, and rebound effect due to nightly short-term nicotine withdrawal.

Nicotine is highly addictive and destructive.  Upon sleep onset, in the first hour of sleep, nicotine acts as a stimulant, reducing the number of apneas and hypopneas during sleep.  However, as nicotine withdrawal continues throughout the night, sleep apnea increases, possibly due to the “rebound effect” of nicotine withdrawal.

Smoking causes upper airway inflammation.  This inflammation causes the nose, uvula and throat to swell, which reduces the space in the airway.

Patients with moderate and severe OSA, and those who have smoked for long periods of time, have increased uvular mucosa and uvular collapse.

An inflamed uvula is sometimes referred to as a “battered uvula.”  This battering effect may be from the thickened mucosa due to the smoking or the beating it takes being bounced around during loud, all-night snoring.

The inflammation in the oral cavity caused by smoking, and the nicotine rebound effect caused by withdrawal, contribute to increased severity of sleep apnea.

Snoring is the audible vibrations of the upper airway the occurs when air is moving through the restricted, partially obstructed airway.  Smokers are more likely to snore. Smoking is a known risk for snoring, and snoring is a symptom of OSA. 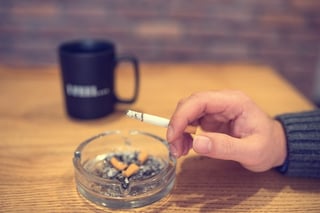 A study found a higher prevalence of heavy smokers with an AHI of greater than 50 events per hour (remember that severe apnea is 30 events per hour). This figure means that in each hour of the night, the person stops breathing for an average of 20-40 seconds 50 times each hour.

Current smokers were found to have longer durations of hypoxia during sleep, and smokers with OSA showed significantly lower oxygen levels in the blood during wakefulness and NREM sleep.

A sleep trial found that smokers spent more time during the night in the lighter sleep stages, while the non-smokers experienced more restorative, deep sleep.

Being a stimulant, nicotine taken within two hours of bedtime will disrupt the sleep-wake cycle.  The stimulation from nicotine may cause a longer sleep latency, taking longer to fall asleep initially. It is estimated that, due to the stimulating effects of nicotine, a person loses 1.2 minutes of sleep for every cigarette they smoke.

The sleep fragmentation that occurs due to smoking and OSA may prohibit the person from going into REM sleep, the stage of sleep that restores mind, memory and cognitive abilities.

Dreams occur in REM sleep.  When a person is in the process of quitting smoking and is already on CPAP or other therapy for their OSA, it is common for persons to experience vivid dreams. This REM rebound may be due to the person finally achieving consolidated sleep and being able to get into REM sleep.

The National Sleep Foundation states that, due to the stimulating nature of nicotine, smokers can easily develop insomnia if they smoke frequently and close to bedtime. 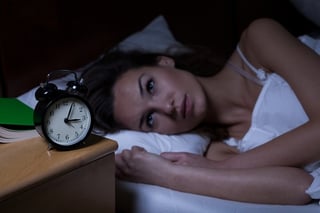 Insomnia on its own will decrease the amount of sleep time a person receives, causing excessive daytime sleepiness and sleep deprivation.  OSA is commonly misdiagnosed as insomnia, especially in women.

Smokers hear it constantly.  Stop smoking.  Nicotine is a highly addictive drug.  Stopping isn’t easy, and most people are not successful on the first try.  Smoking cessation programs were developed to help.

If you have sleep apnea or suspect that you have it, talk to your doctor or a sleep physician.

If you have sleep apnea and you smoke, do not delay.  Help is available to support you in improving your health and living vibrantly.