May is National Stroke Awareness Month in the US.

It gives us a good opportunity here at Sleep Resolutions to discuss the dangers and risk factors of untreated obstructive sleep apnea (OSA).

One of the greatest health risk factors associated with stroke is sleep apnea.

Let's take a look at the relationship between the two.

What is a stroke? 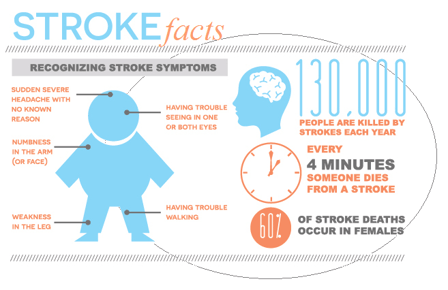 Stroke.org defines a stroke as an incident that "occurs when blood flow to an area of brain is cut off."

The body functions related to the affected areas of the brain won't work without oxygen.

Or, if they do, they are compromised. If left untreated, brain cells eventually die.

There are two kinds of strokes: 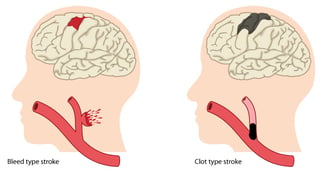 Ischemic strokes (clot type) occur when a vessel directing blood to the brain is obstructed by a blood clot.

These clot-type disruptions to the vascular system only temporarily interrupt blood flow, and once the clot passes, the body recovers and there is no damage.

Blood clots are generally produced by plaques that line your blood vessels due to a condition known as atherosclerosis.

What are the symptoms of a stroke?

The National Stroke Foundation offers this easy-to-memorize approach for addressing concerns if you suspect someone is having a stroke:

How is sleep apnea related to stroke?

"It may be that OSA leads to structural and physiologic changes in the heart that can predispose patients to cardioembolic stroke via mechanisms other than atrial fibrillation," she said.

Materials published by the National Stroke Foundation explain that "sleep apnea can be an after effect of stroke, but can also be the cause of a first time or recurrent stroke. The condition causes low oxygen levels and high blood pressure, both of which can increase the risk of a future stroke."

A 2014 study (Australian) published in the Journal of Clinical Sleep Medicine showed that people with moderate to severe obstructive sleep apnea were four times more likely to have a stroke even when results were adjusted for factors like obesity, cholesterol levels, hypertension, and smoking.

The study's lead author, Nathaniel Marshall PhD, said "Sleep apnea is a common disease that has a powerful impact on public health because it greatly increases the risk of strokes."

Also, a Michigan-based study cited by the American Heart Association, also in 2014, reveals that those who have stroke damage to their brainstem have a much higher prevalence of sleep apnea than those with stroke damage in other parts of the brain.

Also known as high blood pressure, hypertension is a condition which weakens or damages blood vessels. It's caused by pressure being placed on the heart and the vascular system (arteries and capillaries).

If you have sleep apnea, your blood pressure increases due to your failure to breathe adequately. Your blood oxygen levels fall, which sends a signal to your brain to constrict your blood vessels in order to push more blood through the system more quickly (in service of keeping the brain and heart supplied with blood).

If OSA goes untreated, these problems continue into daytime, even when you are breathing completely.

One study published in Stroke in 1996 showed that, among all other related risk factors, only snoring was significantly related to the likelihood of having a stroke while asleep.

The odds of snoring as a risk factor for stroke were shown to dramatically rise for those who were also overweight and suffered from excessive daytime sleepiness.

Today we know that the trifecta of snoring, obesity, and daytime fatigue is a major indicator of undiagnosed sleep apnea. This is why complaints of snoring, if accompanied by these other concerns, lead to need to conduct sleep studies to rule out OSA.

The sleeping process is critical for a healthy cardiovascular system. Sleep provides the body with necessary downtime to heal and restore itself.

The National Sleep Foundation warns that those who don't get enough sleep are at higher risk for life-threatening problems like stroke and heart attack. They cite one study which found that those who slept fewer than 6 hours a night were 2 times more likely to have a stroke or a heart attack. Are you sleep deprived?

The theory behind this relationship? Insufficient sleep causes disruptions to necessary processes that use sleep to self correct, like inflammation and metabolism. Blood pressure also increases with periods of poor sleep thanks to the overactive nervous system response that results.

If you've had a stroke

According to the Mayo Clinic, most patients who have strokes develop sleep apnea even if they didn't have it prior to the stroke. If you have OSA following a stroke, you should be concerned, as this is associated with less complete recovery, worsening of stroke symptoms, and a higher chance of death.

What's more: Using CPAP to treat sleep apnea may become problematic for victims of stroke, as functional damage caused by stroke can make it difficult to use. However, alternative therapies can be helpful in treating OSA for some patients.

It's easy to check your blood pressure. You can do it at home using a portable device, or you can go to the store and use one of their machines. You can even go to the fire station and have the medics there take a look. Remember, high blood pressure is a silent killer. You may never notice its symptoms.

If yours is elevated (the top number is higher than 139 and the bottom number is 90 or higher), you need to contact your doctor immediately. Treatments for hypertension are readily available, easy to take, and affordable. This simple approach can help you avoid major health problems, including stroke.

In addition, if you suspect you have a sleep-breathing disorder like sleep apnea, please have it checked out. Treating your OSA may also improve your hypertension and could even save you from having a stroke.