Sleep Apnea and Cancer: One more reason to treat your snoring 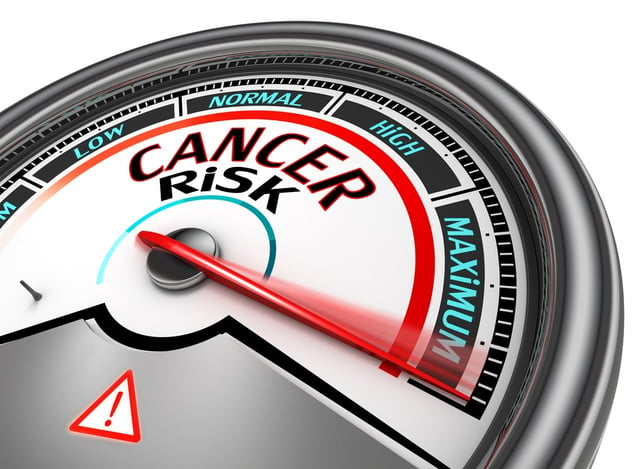 It seems unlikely that snoring, which seems harmless, could actually be linked to cancer. However, untreated chronic snoring is destined to turn into obstructive sleep apnea (OSA), and recent research shows compelling connections between OSA and cancer.

What the research says

Several recent studies—each using different approaches to observe potential connections between cancer and sleep-disordered breathing (SDB)—conclude that what happens during snoring or sleep apnea creates conditions that support the growth and spread of tumors. SDB includes sleep apnea and snoring.

Estimates show that up to 28 million Americans suffer from OSA. Its treatment and prevention have already become a top concern for doctors. OSA is connected to many other chronic health problems, including diabetes, congestive heart failure, stroke, high blood pressure and cardiovascular disease. Adding cancer to this list of potential problems only makes more urgent the need for diagnosis and treatment of SDB.

Snoring, and its more severe cousin, OSA, creates a series of responses in the body as it tries to correct oxygen depletion in the bloodstream. Let's take a closer look.

What happens in the upper airway when you snore?

The tissues in your upper airway tend to lose structure as you sleep. You're relaxed, after all, and so are the muscles in the chest, neck, and face. Breathing in and out through an airway that's surrounded by soft or "flabby" tissue results in audible vibrations in the throat. These sounds may be soft or loud, or you might hear groans or whistles instead of the rattling most often associated with snoring.

Think about how well you sleep when you have a head cold. This is a temporary form of upper airway resistance, but it still means you will struggle to breathe due to congestion or inflammation in your nasal passages.

Snoring ultimately leads to disrupted sleep (not only for the snorer, but for the snorer's bed partner). Add in the factor of aging: this can worsen snoring by default, as our tissues and muscles generally lose their tone as we grow older. This creates the perfect opportunity for it to develop into OSA. 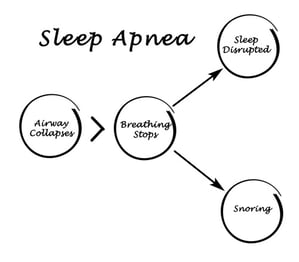 OSA occurs when your upper airway collapses as you try to breathe while sleeping. These obstructions, partial or total, mechanically restrict your airway for periods from 10 seconds to more than a minute, which explains the silence, choking, or gasping that often occurs during an episode of apnea.

You literally stop breathing in your sleep, but are unaware of it. As you sleep, your brain normally takes over the voluntary function of breathing for you. Once your brain notes the rapid drop in the oxygen in your bloodstream, it sends out stress signals to force you to wake up so you can voluntarily clear your airway and breathe.

Your body requires an adequate supply of oxygen in order to function properly. Without it, all systems must work harder to perform even basic functions. When breathing obstructions happen all night long, you can expect to have very poor sleep with multiple night-time awakenings. If left undiagnosed and untreated, long-term problems can and will develop.

Snoring and sleep apnea are both part of a spectrum of what is known as sleep-disordered breathing (SDB). In each case, the issue of untreated upper airway resistance—common to all SDB—leads to the following problems: 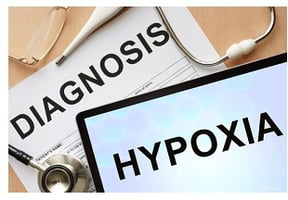 Clinically, the term is nocturnal intermittent hypoxia. This is the main consequence of OSA: the upper airway collapses, you can't breathe, and this starves the bloodstream oxygen. The brainforces awakenings so you can force yourself to breathe to quickly replenish the bloodstream of its lost oxygen.

It turns out that nocturnal intermitten hypoxia strongly links sleep apnea and cancer. The "blood oxygen roller coaster" it creates establishes conditions in the body which encourage cancer to grow and spread.

The body has a backup system for long-term problems with unchecked hypoxia: it can create additional blood vessels to improve oxygen supply to the tissues. However, the unintended consequence of this is that ongoing problems with hypoxia provide the perfect conditions for growing and spreading tumors as well.

Systemic inflammation and the immune system

Untreated SDB has been shown to increase inflammation systemically (or, throughout the body). If this inflammation continues without relief, it creates chemical imbalances in the bloodstream that lead to oxidative stress, the culprit behind many chronic health problems.

In the presence of systemic inflammation, the immune system tries to compensate for these problems, but in doing so, it may also improve conditions for tumors to establish, grow, and spread. Immune system problems (like psoriasis and autoimmune disorders) are also widely associated with a combination of sleep disruption and nocturnal intermittent hypoxia.

Oxidation is the consequence of long-term inflammation; oxidative stress describes the damage that results from unchecked systemic inflammation.

The blood oxygen roller coaster described above contributes to oxidative stress by wearing down the system enough so that cancer (and other conditions, like hardening of the arteries or heart failure) can take hold. In fact, in the mouse studies cited above, tumors were shown to grow significantly larger and more aggressively in the oxygen-deprived mice than in those not deprived of oxygen.

Sleep is a whole-body process that has a unique relationship to all body systems. When sleep is disrupted, it is fair to say that system disruption also occurs. Over time, these disruptions render an environment where chronic disease can flourish.

In the case of cancer, its growth and spread seem to have a direct relationship to untreated OSA. Some research even suggests that the biggest problem with OSA—nocturnal intermittent hypoxia—can be blamed for increased resistance of cancer cells to therapies such as radiation.

The evidence thus far is compelling and supportive across several studies, but researchers admit that more research must be done to more specifically identify key links between SDB and cancer which could unlock solutions for prevention, treatment, and survival, some which may include the most commonly prescribed therapy for OSA: continuous positive airway pressure (CPAP).

In fact, in the Wisconsin Cohort study, they discovered that the association between cancer and untreated OSA strengthened once they removed patients treated with CPAP from their mortality studies.

What can you do?

Sleep-disordered breathing and cancer, separately, are both highly prevalent (even if undiagnosed), but also potentially treatable and preventable. Prevention is mostly a matter of practicing a healthy lifestyle.

If you've put off a visit to your doctor to learn how to treat your snoring, don't delay. And remember, snoring and OSA already have well-established links to other chronic illnesses, such as cardiovascular disease and diabetes.

There's no good reason not to have sleep-disordered breathing concerns checked out; adding a potential cancer diagnosis to your risk factors is just one more good reason to call your doctor today.

If you'd like more inormation on this or any of our sleep medicine content provided by Sleep Resolutions please call us today (620) 271-9400. Or Click on the image below to request you FREE sleep Assessment today!

When Was the Last Time You Got a New CPAP Mask? 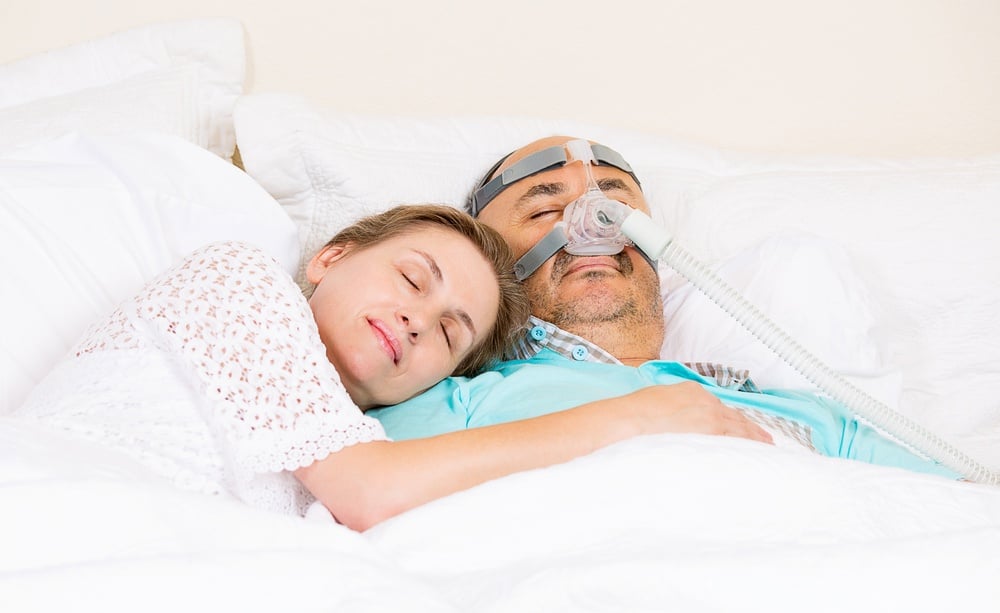 Will wearing a CPAP mask at bedtime ruin my sex life? 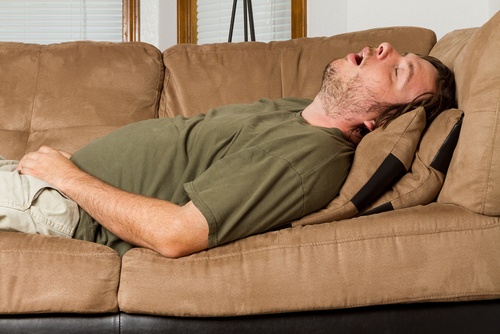