Can You Get Too Much Sleep? Yes, you can get too much sleep, and it can be deadly.

America is experiencing a sleep deprivation crisis.  People are not getting enough sleep. The rush-rush-rush of everyday life is taking its toll on us.

Can we stockpile sleep hours on the weekend and holidays to make up for not enough sleep during the week. Nope, sorry, our brains are not savings accounts. Our brains live in the present.

“I need more sleep” say the millions of us who are sleep deprived. Isn’t more better?

The Numbers Are In 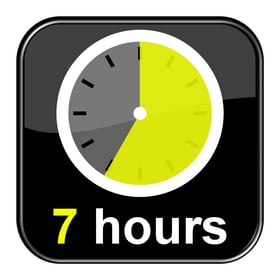 Worldwide studies have been conducted on oversleeping and have found that people who sleep closer to 7 hours per night live longer than those who sleep more or less. Inappropriate sleep time (either short or long) has been found to be significantly associated with lower quality of life. Regarding long and short sleep in adults, a U-shaped relationship curve leading to chronic diseases and poor mental health exists.

Many studies have found a U-shaped relationship between under- and over-sleeping and whatever medical condition or disease the clinicians are studying. 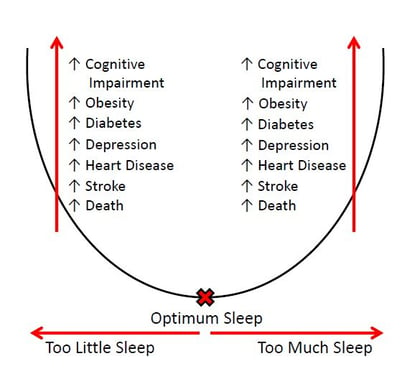 A U-shaped relationship compares long- and short-sleep durations to normal sleep times (7 to 9 hours).  The optimum results and greatest health results occur in people who sleep 7 to 9 hours. Those who sleep less than 7 hours or more than 9 hours are susceptible to serious medical conditions and earlier death.

Studies have found a U-shaped relationship regarding oversleeping with many dangerous medical conditions.

During the normal 7 to 9 hour sleep period, the body produces neurotransmitters (chemicals) in the correct amounts to engage the body in repairing and restoring body cells and functions. Too much sleep produces too much of these chemicals and results in an overabundance of the chemical and an imbalance in the brain.

A 2009 Spanish study led by Benito-Leon reported that prolonged sleep duration occurring either at night or during daytime naps may be associated with an increased risk of dementia and Alzheimer’s.

Depression and lower socioeconomic status are both strongly linked to oversleeping. This may be due, in part, to poor people having less access to proper health care and diagnostic tools to identify serious illnesses associated with oversleeping, such as heart disease, diabetes, and depression.

It is generally believed that 15 percent of people with depression oversleep (on average, more than 10 hours) and van Mill found that long sleep is linked to persistent depression.

Nathaniel Watson at the University of Washington conducted an interesting study of twins which found both short sleep (less than 7 hours) and long sleep (more than 9 hours) was associated with a genetic propensity for depressive symptoms in twins.

Chaput conducted a study that found short- and long-duration sleep times were associated with type 2 diabetes and impaired glucose tolerance.

McClenathan conducted a Canadian study focusing on sleep duration’s effects on glucose tolerance and diabetes and, like Chaput’s study, found long- and short-sleepers were more likely to show impaired glucose properties and a higher risk of diabetes than normal-length sleepers. Over a long period of time, long- and short-sleepers gained more weight than normal sleepers. Sleepers who got more than 9 hours were 21% more likely to become obese than normal sleepers.

A Spanish study found, among older adults, long and short sleep was associated with obesity and short-term weight gain in women.

Separate studies by Ayas and Shankar correlating sleep duration and coronary heart disease found that short- and long-sleep durations are independently associated with a modestly increased risk of coronary events.

Many studies conducted across the globe have found that both not enough sleep and too much sleep can hinder your health. If you are a long sleeper and snooze more than 9 hours a night, chances are you may have a medical problem that needs treatment. Seeking medical treatment may find the reason you have low energy, are depressed or have any of a myriad of conditions that oversleeping causes or contributes to.

Things To Do to Eliminate Oversleeping

Below are some habits and behaviors that you can incorporate into your daily life to create an environment for optimum sleep:

Get natural sunlight. Sunlight is the strongest circadian rhythm influence. Misaligned circadian rhythms can make us sleep longer than usual. Getting outside helps balance the system.

Avoid the blue light glare of TV, computer and phone screens before bedtime.

Go to bed early enough to get 7 to 9 hours of sleep.

Don’t hit that snooze button!  Put your alarm clock away from your bed, if necessary, so you have to get out of the bed to turn off that dang alarm.

Get up at the same time every day. This will help realign your circadian rhythms. Do not sleep-in on your days off.

Do not use alcohol to induce sleep.

Eat a variety of foods and less carbohydrates and calories overall.

And, of course, exercise, but not too close to bedtime.

Our bodies love balance. Too much of a good thing is not good, especially when it comes to sleep. Sleeping 7 to 9 hours per night may help provide your brain and body with the proper amount of everything it needs to ensure good health.

Oversleeping: The Effects and Health Risks of Sleeping Too Much, Huffington Post, 1/29/2016.

Too Much, Too Little Sleep Linked With Alzheimer’s Risk, Huffington Post, 7/17/2012.

Jean-Philippe Chaput, Seven to eight hours of sleep a night is associated with a lower prevalence of the metabolic syndrome and reduced overall cardiometabolic risk in adults, PLoS One, 2013; 8(9):e72832.

Jae-Hyun Kim, The association between short or long sleep times and quality of life, Journal of Clinical Sleep Medicine, 12:08.

Alexandra Sifferlin, Risk for stroke is greater in people who oversleep, Time, 2/26/2015. 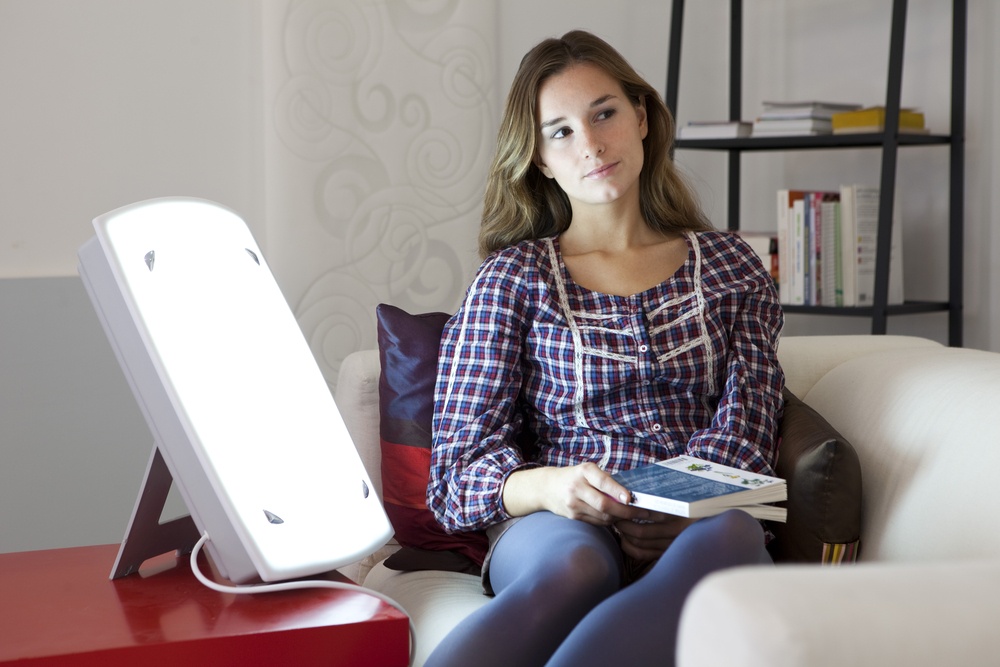 Using light therapy to stay awake during the day