Sleep health has only recently captured the attention of the medical community and the general public.

Research up until the 21st century has been based primarily on data focused on nonHispanic Caucasians. Meanwhile, the Hispanic population in this country is growing steadily. Hispanics in the US have diverse origins—Mexico, Central America, South American, Puerto Rico, Cuba, and Spain.

Scientists in the last 10 years decided to examine health problems that could be unique to specific ethnic populations. Ultimately, the outcomes of studies based on Hispanic ethnicity have led researchers to take note: the risk factors for health problems in the US Hispanic population do not mirror those for the white population.

One finding in particular stands out: the sleep disorder known as obstructive sleep apnea (OSA) has been found in 14 percent of Hispanic men and 6 percent of Hispanic women. The incidence of sleep deprivation, by whatever cause, is also measurably higher.

OSA is a sleep-breathing disorder which can lead to serious chronic health problems such as heart disease, high blood pressure, depression, and Type 2 diabetes. And while race and sleep may yield results that are specific to certain communities, the fact remains: untreated sleep disorders—especially OSA and sleep deprivation—can lead to the same problematic, even dangerous, outcomes.

The research was done to capture meaningful health data on Hispanic men and women.

“…Because of the participation of 16,145 Hispanic men and women in this groundbreaking NIH study, we have a better picture of health in America,” said Dr. Jane L. Delgado, President, the National Alliance for Hispanic Health.

Some of the findings of the HCHS:

You can read a PDF of the entire study here.

There are known relationships between sleep-disordered breathing like OSA and asthma, depression, type 2 diabetes, and hypertension, making sleep a potential “missing link” that could account for the higher rates of these chronic health problems among Hispanics.

Heart disease, obesity, and diabetes for US Hispanics: more evidence of an OSA connection

According to the National Sleep Disorders Research Plan data from 2003, the leading cause of death in Hispanic men and women is heart disease. Also, Hispanics in the US generally live with a higher risk for obesity and diabetes, according to research from the HCHS.

While diabetes, obesity, and heart disease are not sleep disorders, they are major chronic health problems with distinct links to obstructive sleep apnea (OSA) and sleep deprivation.

SLEEP magazine, in its article, “Social and Health Correlates of Sleep Duration in a US Hispanic Population,” gleaned these results from an 11,000-subject sample extracted from HCHS which specifically investigated for sleep problems:

Another study, The Multi-Ethnic Study of Atherosclerosis (MESA), showed evidence of sleep disturbances and undiagnosed sleep apnea across nonwhite communities in the US. This study, involving 6,000 participants, revealed a high prevalence of undiagnosed OSA in the Hispanic community.

US Hispanics and sleep deprivation

Sleep deprivation (also known as insufficient sleep or short sleep) occurs when you don’t get enough sleep at night.

The National Sleep Foundation has made recommendations for all age groups as seen on this chart. If you routinely do not achieve the full amount as listed in their chart, you run the risk of becoming sleep deprived.

Sometimes, sleep is lost to bad bedtime habits or lifestyle choices, but often it's also due to medical conditions.

For instance, OSA can cause sleep fragmentation, which breaks up the sleep architecture all night and leaves you with less efficient sleep. This can lead to sleep deprivation if you are awakened many times a night due to breathing lapses. 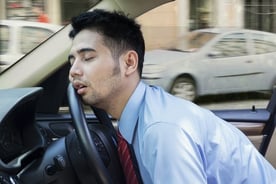 Over time, sleep deprivation becomes sleep debt. And with sleep debt comes a host of health problems that can be very difficult to overcome.

The cost of sleep deprivation is also felt in the higher number of workplace accidents and car collisions that result from drowsy driving and functioning without adequate sleep.

Sleep habits and sleep hygiene, measured in the Hispanic population in a study reported in SLEEP in 2010, may also be poor among Hispanics, with some evidence that acculturation to an Americanized lifestyle may make it harder for people in this community to get enough sleep.

Many people sleep a full night without realizing they are struggling from a sleep-breathing disorder like OSA. Eight hours in bed does not equal 8 hours of sleep if you are waking up all night long trying to catch your breath.

One of the efforts that came out of the HCHS study was this tool used as a probability predictor of sleep apnea with specific application for the US Latino population. This tool does not replace a visit with a sleep specialist at a sleep centeer to identify, diagnose, and treat OSA.

If you are Hispanic, use the calculator. If it suggests you have a high probability for sleep apnea, you are encouraged to contact your sleep clinic to see a sleep doctor right away so that you can receive proper evaluation.

The National Healthy Sleep Awareness Project launched the pledge to “Dejar de Roncar” (or “Stop the Snore”) to raise awareness among Hispanics about problems with sleep-breathing disorders and their relationship to more serious, often life-threatening, health problems.

Sleep deprivation and OSA, if ignored, can lead to negative impacts on the health of millions of US Hispanics. If you or a family member is at risk, please see a doctor right away to discuss the warning signs, as well as the treatments, for sleep apnea.