What is Overlap Syndrome?   (COPD and Sleep Apnea)

Overlap syndrome is a term used to describe two common respiratory diseases, OSA (obstructive sleep apnea) and COPD (chronic obstructive pulmonary disease).  Each disease is a serious condition in its own right, but when a patient is suffering from both maladies, synergistic effects cause more serious and complicated consequences.

COPD is a progressive pulmonary disease that includes chronic bronchitis and emphysema.  Cigarette smoking is the main cause of COPD.  Chronic bronchitis develops when the irritated airways make mucus, making the walls of the airway thick and inflamed. This narrows the airway and restricts the amount of air that can flow into the lungs.

With emphysema, patients can get air into the lungs but the air gets trapped in the lungs due to damage to the alveolar air sacs.  Both diseases restrict breathing, causing a lower than normal oxygen level called hypox 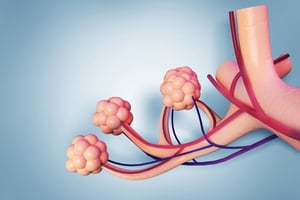 COPD patients usually have increased levels of carbon dioxide in their bodies because the restricted airways reduce the amount of oxygen entering the lungs (chronic bronchitis) or the damaged air sacs cannot offer good gas exchange (emphysema). As a result, the carbon dioxide gets stuck in the body.  Increased levels of CO2 can cause hypercapnia, turning the pH level more acidic. Prolonged acidosis can cause deterioration of the respiratory functions, lead to heart arrhythmias, and cause other deleterious effects.

Sleep apnea is characterized by the repeated obstruction of the airway during sleep.  When the airway is obstructed, oxygen cannot pass into the lungs. This lack of oxygen again causes hypoxemia. Frequent, long apneas can result in severe hypoxemia, endangering a person’s life.

When a person has an apnea and is not getting any oxygen, the heart will slow down during the apnea. Stress hormones will be dumped into the bloodstream, and the brain will arouse. The person will then take a deep breath.  The heartbeat will increase to get the new oxygen to the cells.  Repeated slow-fast-slow-fast action of the heart due to the apnea will increase systemic and pulmonary hypertension.

Normally during sleep, the respiratory system’s response to carbon dioxide is not as robust as when we are awake.  As a result, during sleep, carbon dioxide levels in the blood naturally increase and ventilation decreases. In the lighter stages of NREM sleep, the amount of air a person takes in is 13-15 percent less than when the person is awake.  Airway resistance can increase substantially in NREM due to airway muscles relaxing. This normal respiratory response places added burden on COPD patients.

During wake and NREM sleep, there are several muscles that work to make breathing possible.  These muscles include the diaphragm and accessory muscles such as the pectoral, sternomastoid and scalene mu

scles.  All the muscles work in conjunction to lift and expand the rib cage during inhalation.

During REM sleep, there is great variability in respiratory patterns, airflow and the amount of air we take in.  The body is paralyzed to prevent the person from acting out dreams.  The only breathing muscle working is the diaphragm. There is no help from the accessory muscles.  For healthy individuals, this is not a problem. But for a COPD patient, this greatly hinders breathing during sleep. Because COPD patients are taking a compromised, decreased breath during REM sleep, more severe hypoxemia results.

The absence of oxygen for extended periods of time due to apneas results in even more severe nocturnal hypoxemia, prolonged oxygen desaturation at night, increased risk of pulmonary hypertension, right heart failure and cor pulmonale.

According to RT Magazine, “… it is estimated that a patient with one of these diseases has a 10% chance of suffering from the other as well. Examining prevalence figures in the general population, in those over 70 years of age diagnosed with COPD, OSA is estimated to be a comorbid disease in some 15% of the cases.”

According to Resmed, a leading respiratory equipment company, one recent study determined that “… up to 66 percent of COPD patients who enrolled in pulmonary rehabilitation had tested positive for OSA.”

More than 11-12 million people have COPD, but up to 24 million are undiagnosed, whereas 15-18 million have sleep apnea, the vast majority of which are undiagnosed. These numbers indicate that overlap syndrome is a treacherous condition that needs immediate and sustained research.

More research is needed to examine the relationship between these two deadly diseases, as well as optimizing treatment modalities and developing techniques for supporting patients to adhere to treatment.

In March 2016, the American Sleep Apnea Association was awarded $2.5 million in funding for a three-year study to monitor treatment for overlap syndrome patients. Such research will hopefully offer patients more relief from this deadly malady.

Treatment for overlap syndrome patients must address both the COPD and the OSA. Various modalities to treat COPD include quitting smoking, avoiding lung irritants, using bronchodilators and steroids, getting on oxygen, adhering to pulmonary rehabilitation, and other available options. 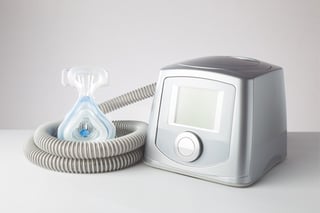 To eliminate the sleep apnea, a bi-level CPAP machine, or BiPAP machine, administers not only pressurized air to eliminate apneas but also gives added air during inhalation.  This supplemental ventilation reduces the work of breathing and gives the patient the extra air they need to breathe easier.  If a person’s oxygen level is below 89 percent, supplemental oxygen can be added.

A new technology, Non-Invasive Ventilation, has recently been developed for treating the breathing aspects of overlap syndrome. This sophisticated machine not only provides supplemental air to the patient to eliminate apneas, but it adjusts the flow according to the patient’s volume of breathing and respiratory rate to provide optimal amounts of air for easier breathing.

Continued research and development of machines and other treatment modalities will provide patients with the ability to sleep soundly and apnea-free, thus eliminating the devastating effects of OSA on COPD patients.