Drowsy driving has become a major concern for individuals, workplaces, schools, and state and federal governments.

Statics on the Dangers of Drowsy Driving

Drowsy driving causes 1 out of every 5 fatal crashes – that’s 20 percent.

In a National Sleep Foundation (NSF) survey, 60 percent of adult drivers reported driving while drowsy at least one time per month in the past year. In that survey, 37 percent said they actually dozed off at the wheel – that's almost 2 out of 5 drivers.

Just How Dangerous is Drowsy Driving?

Drowsy driving is as dangerous as drunk driving.  The risk of a crash increases with the number of hours since the person last slept. An Australian study compared sleep deprivation with blood alcohol content (BAC) in terms of how likely the person was to cause a crash. The results indicated that a person who has not slept for 18 hours performs as if he had a BAC of .05. For someone who hasn’t slept in 21 hours, it would be equivalent to a .08 BAC (that legal intoxication in all 50 states), and for those who have been up for 24 hours, that is equivalent to .10 BAC.

Sleep deprivation caused by an excessive number of waking hours causes a decrease in alertness, an inability to perform, cognitive as well as memory difficulties, physical problems, and an increased risk of motor vehicle or workplace accidents. 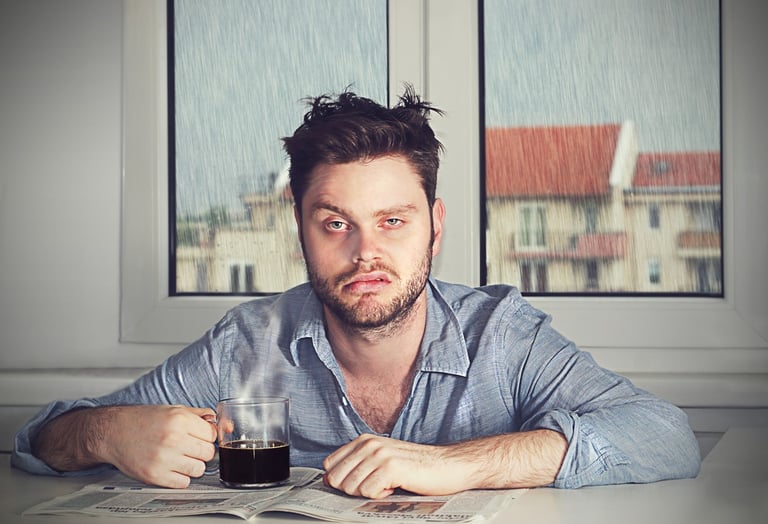 Everyone is at risk. One bad night of staying up with your colicky baby makes you a drowsy driver on your morning commute. Sleep loss is one of the major contributors of drowsy driving. That sleep loss can be from tending a child, to voluntarily staying up late, to not getting restorative sleep because of obstructive sleep apnea or some other sleep disorder.

Sleep debt accumulates in those who do not get enough sleep over time, causing a higher risk of adverse effects such as accidents.

Crashes that drowsy drivers are involved in are usually serious accidents.  They occur either late at night between midnight and 8:00 a.m. or in the early afternoon between 1:00 p.m. to 3:00 p.m. when we are less alert due to our circadian rhythms. Single drivers account for 82 percent of the drowsy driving crashes. Crashes usually involve the vehicle leaving the roadway at a high speed.

Young male drivers are especially prone toward drowsy driving, and teens and young adults are involved in more than half of all drowsy driving crashes annually.

Male adolescents and young adults are especially vulnerable to drowsy driving. In many teens, their natural sleep phase is more delayed than older adults. Teens get drowsy around midnight or later. 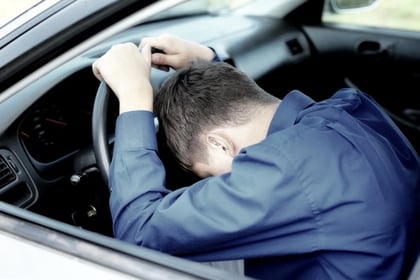 With school starts as early as 7:00 a.m., teens are forced to wake early. Less than 30 percent report getting an adequate number of sleep hours per night.

Insufficient sleep in fatigued teens is linked to drinking and driving, texting while driving,  driving without seat belts buckled, riding with someone who has been drinking, and making other poor decisions regarding risky behavior.

Alan Mulgrew led research at The University of British Columbia studying the correlation between people who had obstructive sleep apnea (OSA) and car accidents. He found that people with OSA were five times more likely to be involved in a car accident. Mulgrew stated “When we looked at the small number of truly awful crashes—head-on collisions and collisions with pedestrians or cyclists, 80 percent of crashes of that kind were in OSA patients.”

Drivers Affected by Their Job Schedules

There are several occupations that expose workers to sleep deprivation and drowsy driving.

Police officers are likely to work rotating shifting, 8-12 hours at a time, coupled with overtime and moonlighting.  In a survey, 46 percent admitted to falling asleep while driving, and 25 percent stated it happened one to two times per month. In addition, approximately 40 percent of police officers in one study screened positive for obstructive sleep apnea. 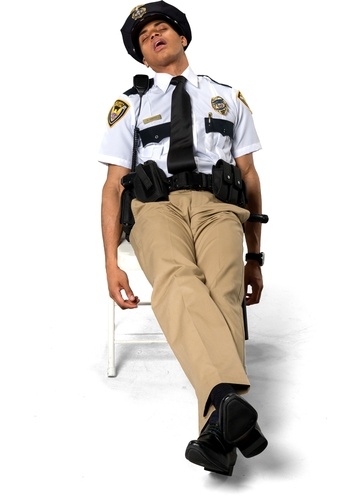 Shift workers account for 15 percent of the workforce. When compared to drivers who were well rested, shift workers driving home from work had a higher risk for microsleep (falling asleep for a few moments), wandering within their lane, slower response times and near-miss crashes.

Those who work rotating shifts and overnight shifts are prone to sleep deprivation due to the disruption of their natural circadian rhythms.

Sleeping during the day causes the brain to fight the natural inclination to be awake. Most people who sleep during the day get, on average, about 4 to 5 hours of sleep.

This leaves them in a vulnerable position for drowsy driving, as well as poor performance at work, susceptibility to work-related accidents, and a number of other physical and mental problems that come as a result of sleep deprivation.

Health Care Workers number more than 14 million employees, working 24/7 and frequently working 12 or 13 hour shifts. In a survey of health care workers, though the highest amount of sleepiness was reported by night shift workers, nearly 66 percent reported drowsy driving over a month-long period. Medical interns and re

sidents are particularly vulnerable to drowsy driving due to working more than 80 hours per week and frequently being awake for more than 16 hours a day.

Travelers, business persons, airline personnel, and others who are required to travel over more than two time zones suffer jet lag, which is another form of misaligned circadian rhythms. Lack of sleep or poor quality sleep causes sleep debt and adversely affects these people’s driving skills.

Employees who have been awake for long periods of time on the job are also susceptible to drowsy driving.  A recent example of this occurred with a New Jersey accident involving a drowsy Walmart driver and celebrity Tracy Morgan. Morgan’s vehicle was struck at 1:00 a.m. on the New Jersey Turnpike by a Walmart truck driver. Morgan’s friend James McNair was killed. The Walmart employee had been awake for 28 hours before the crash. Morgan sued Walmart, and Walmart settled the lawsuit for an undisclosed amount.

In 2003, New Jersey had passed a drowsy driving law which placed drowsy driving in the same class as an intoxicated driver. Because of this law, the Walmart driver is currently facing aggravated manslaughter, vehicular homicide and aggravated assault charges.

Commercial Motor Vehicle (CMV) Drivers keep tight schedules, and pressure from employers to drive too many hours causes accidents. Stafanos Kales, Chief of Occupational Medicine at Cambridge Health Alliance, found 20 percent of all large truck crashes are due to drowsy driving, which totals almost 9,000 fatalities and up to 220,000 serious injuries. CMV drivers sleep an average of 5 to 6.2 hours per 24-hour period during the workweek. The Federal Motor Carrier Safety Administration estimates that 13 percent of truck drivers drive fatigued.

Kales recommends screening, diagnosis and treatment for untreated OSA for large truck and bus drivers to make the roads safe for the public. There is strong opposition to this recommendation from truck drivers themselves, trucking companies, and businesses. Some recommendations and regulations have been put into effect but are many times unenforced.

Drivers who are required to be evaluated for OSA may not be truthful with the medical examiner, for fear they will be suspended or lose their job if they are diagnosed with OSA. Medical examiners are not always forthright with their diagnoses due to a concern of losing business.

Trucking companies fear lost revenue because drivers may need to drive less hours per day or drivers may be terminated because they did not follow through with treatment.

Drivers who are diagnosed with OSA may lose their jobs for non-compliance to therapy, but regulations do not require a driver to tell a prospective employer about their OSA diagnosis. They can keep their OSA diagnosis private. Thus they can get fired from one job and go to another employer who does not adhere to the recommendations and regulations.

You may be driving drowsy if you …

Nod off/can’t keep your head up

Not thinking or your thoughts wander

Drift into the other lane or onto the shoulder

Do not attempt to avoid a crash (because you are asleep)

Drive at high speeds on highways and other major roadways

How to Stay Awake While Driving

Get a good night’s sleep before you drive.

If drowsy in the middle of the day, take a nap before driving.

Stop in a safe area and take a short nap if you get drowsy.

Take someone with you; carry on a conversation to keep you alert.

Exercise every 2 hours on a long trip; take a 15 to 20 minute nap at rest stops.

Do not drive for long periods at night.

Do not drink and drive.

Be aware of medications that make you drowsy and, if possible, do not take them before driving.

If taking medications is unavoidable, have a friend drive you.

Caffeine takes about 20 minutes to kick in. If you are drowsy, drink a caffeinated drink, then take a nap for 15 to 20 minutes. The caffeine will be kicking in then. Do not use caffeine as a substitute for sleep.

If you suspect you have a sleep disorder, speak to a sleep specialist or your primary care provider. If they recommend a sleep study, get one done.

If you have been diagnosed with sleep apnea, use your CPAP machine or other alternative treatment to get good rest.

Part II of this topic continues in the next blog.  We will investigate how individuals can develop good sleep habits that prevent drowsy driving, and discuss how changes in the workplace, schools and in the laws can reduce accidents, eliminate drowsy driving and improve public safety.

Governors Highway Safety Association, Wake Up Call! Understanding Drowsy Driving and What States Can Do